A team meeting of Keihin area was held.

A team meeting of Keihin area was held in Saiseikai Yokohama-shi Tobu Hospital on Friday, August 16. Total of 10 people of a study representative, a study allotment person and a research collaboration person participated.

In this meeting, we discussed mental health issues for foreign residents in Japan. The number of foreigners living in Japan is increasing year by year, and many foreigners live in the Keihin area. Along with this, the number of foreign patients who visit medical institutions has also increased. But it was discussed that language issues and stigma for mental illnesses are a major barrier on-site. In addition, it was pointed out that there were unclear points about the epidemiological reality of mental illness.

It is very important to investigate the reality of these issues for early intervention. We will further solidify the plan and proceed with the survey. 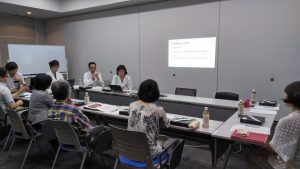